We started and ended our three month road trip through Australia in New South Wales, or more specifically in Sydney. Sydney is NSW’s capital and probably Australia’s most famous city, thanks to the Sydney Opera House. We spent most of our time in New South Wales in Sydney, but we visited a couple of smaller towns as well. We stayed a couple of nights in an old Celtic city and a hippie beach town, learned about whaling and fossicking, and did some geocaching in between. Here are some tips about where to go and what to do in New South Wales.

There’s a whole lot to see and do in Sydney, so we dedicated a separate blogpost to NSW’s capital. Our favourite part was without a doubt Sydney Harbour. Enjoy the jaw dropping views of the Sydney Opera House and the Sydney Harbour Bridge from different angles, both during the day and night. Sydney is more than its famous harbour though. It has lots of beautiful green parks filled with weird birds, and the Bondi to Coogee Coastal Walk takes you along Sydney’s stunning coastline. Don’t forget to try the Aussie pies from Harry's Cafe de Wheels! 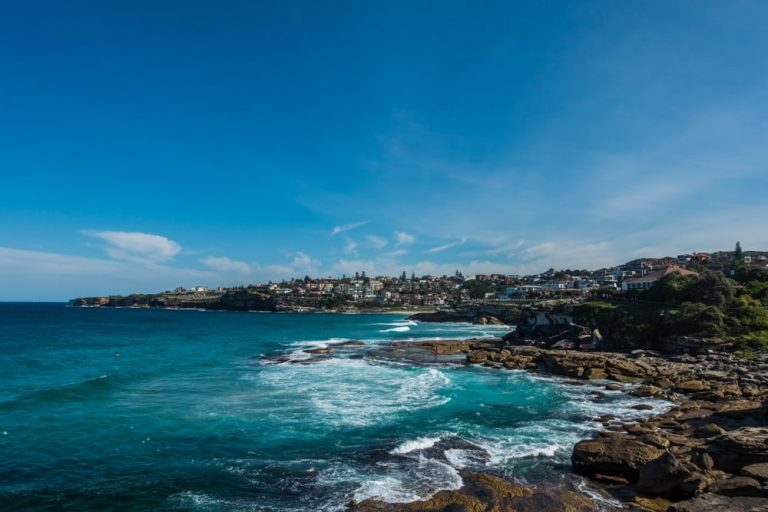 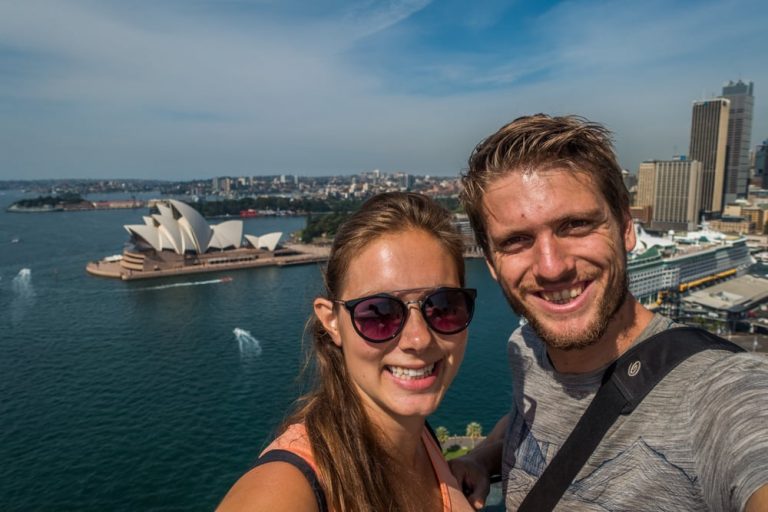 What to do in Sydney

Technically, Canberra isn’t part of New South Wales, but it is surrounded by it, so since you’re in the neighbourhood…

In 1913 Canberra was chosen as capital of Australia, putting an end to the rivalry between Melbourne and Sydney. The city is designed and looks neat and organised, both when you’re in the middle of it or looking from above from  Mount Ainslie. You can recognise a couple of impressive buildings from up there: the Parliament House, and the Australian War Memorial, both worth a visit. Don’t miss out on  Questacon if you love science and interactive exhibitions. We had a blast! Canberra as seen from Mount Ainslie

For an in depth post about what to do in Canberra, we refer you to another one of our blogpost.

Right at the start of our road trip through Australia we visited  Blue Mountains National Park. Situated just 80 km northwest of Sydney, it’s perfect for a day trip. You can do a hike, drive up to some viewpoints, or take the scenic cableway. The Three Sisters as seen from  Echo Point was one of the most impressive views we’d seen so far. In the blogpost “Hiking the Blue Mountains in Sydney” we’ll tell you all about our 4 hour hike along waterfalls and amazing vistas, and why you should do it too.

On our way from Sydney down to Burrill Lake, we took a picnic break at Fitzroy Falls. You can see the water from this fall drop about 81 m down in the valley below: spectacular view! Entrance to this part of Morton National Park is free, but there’s a $4 parking fee. The Three Sisters at the Blue Mountains During the drive from Burrill Lake to Canberra, we had a picnic at  Pebbly Beach. Situated in Murramarang National Park, this beach is known as the home of the surfing kangaroos. Unfortunately that’s a myth. We briefly thought the presence of kangaroos was a myth as well, but the sh*tload of kangaroo poop proved otherwise. Apparently they sleep during the day and come out around dusk. That would explain their absence at noon.

Pebbly Beach didn’t have kangaroos nor pebbles, but the view was beautiful nevertheless! There’s picnic table, a barbie, and some benches. You’re supposed to pay an $8 parking fee, but we didn’t. Don’t tell! We wouldn’t stay that long anyway and in order to pay we would have had to walk all the way up to the main parking (lazy!), so we decided to take the risk.

When you find yourself somewhere between Byron Bay and Glenn Innes, don’t forget to stop at the Raspberry Lookout for a nice view over the Bindery-Mann Wilderness Area.

Visit Eden and spot a whale

A couple we met on one of the campsites in New South Wales recommended us to stop in Eden when we would pass by, so we did! Eden is a small coastal town, near the border with Victoria. It’s known to be great for whale watching. Score! Not in summer, while we were there, but in winter. Bummer… The view from the Eden Lookout at the Rotary Park was nice though, even without whales. You look over the territory of Old Tom, about whom we learned a lot at the Killer Whale Museum in Eden. The lookout has picnic tables, a toilet, and a geocache.

When you decide to visit Eden, hopefully during winter, you must visit the  Killer Whale Museum. Whales have been important for this small town’s economy for many years. Back in the day they harpooned them for their oil, now tourists come in heaps, hoping to get a good shot with their camera. The Killer Whale Museum tells the story about the whaling operations taking place in Eden in the 1800’s and early 1900’s. There are exhibitions of the equipment they used (wooden(!) boats), old photos of the whaling operations are on display, and they house the skeleton of Old Tom, a legendary killer whale (also known as orca). Old Tom was – Spoiler Alert! – the leader of a pack of killer whales helping the whalers of Twofold Bay kill whales. I suppose whale killers would be more on point than killer whales. This unique collaboration went on for decades. The whalers even named each killer whale, recognising them from one another by their dorsal fins. It was absolutely fascinating to learn about this bloodthirsty pack of killer whales. Here’s how they operate. They would start by alerting the whalers of approaching preys by flop-tailing, trashing the water with their tails. After the whale was harpooned, some killer whales would roll over his blowhole to stop the breathing, while others would swim below him to prevent him from sounding, diving deep. They must have loved the taste of whale tongue and lips, the reward for their betrayal of a fellow marine creature.

The last whale was killed in 1928. Two years later, Old Tom’s body was found floating in the Twofold Bay. Nine years later, in 1939, the Eden Killer Whale Museum was built, where Old Tom’s skeleton is on display since. I don’t like Old Tom, but he sure made it in the whaling business!

Visit Byron Bay and chill out or surf

Arriving in Byron Bay, we were welcomed by a sign saying “cheer up, slow down, chill out”. If they would have worked surf in there somewhere, it would perfectly describe the hippie vibe drifting through this famous beach town. It buzzes with young, 20-something backpackers, surfers of all ages, and chill locals. Coming from Gold Coast, which was filled with families, we felt like entering a totally different world.

At this point our legally allowed time in Australia was coming to an end. We didn’t manage to squeeze in some more surfing lessons, but we did spend an afternoon on the  Cape Byron Walking Track. We walked from  our campsite to the  Captain Cook Car Park, where this loop trail starts. We headed down to the beach towards the Fisherman's Lookout and back up via The Pass for a take away lunch from  The Pass Café. With tummies full of toastie and $18 less in our wallet, we continued our walk over the Palm Valley walking tracks. After a short climb, we got rewarded with a great view over  Wategos Beach. An artist was making drawings in the sand, adding something unique to the view. We watched the drawing evolve for a while, before continuing down, up, and back down to Little Wategos Beach. We had the beach almost to ourselves, perfect conditions to search for a geocache. After a rather adventurous find, we followed the walking track to the  Easterly Point Lookout for a view over the eastern most point of the Australian mainland and beyond.

My legs were getting tired of walking at this point, and the climb up to the  Cape Byron Lighthouse didn’t help with that. We decided to skip climbing the lighthouse itself, as people were lining up to do so. There’s a café there and toilets, even a souvenir shop. We took the free and green way to the lighthouse, but you can take the bus or your car there as well, provided you pay the bus or parking fee. The last part of the Cape Byron Walking Track took us down through a forest, ending up back at the Captain Cook Car Park where we started. It was a little exhausting, but the views are worth the effort. After that, you’ve surely earned a treat! We would recommend a delicious ice cream from  In The Pink. Yum! Since the owner of a campsite in Robe told us about fossicking, I was excited to try it. That’s why we decided to pass by Glen Innes, situated in New England High Country. Unfortunately our timing was a little off. We were one week early to celebrate the Celtic culture during the Australian Celtic Festival, held here because the early settlers were mostly Scots. It’s supposed to be quite the festival according to the locals. Visiting Glen Innes made us feel like we’d stepped back in time. We were amazed by the look and feel of the town centre, with its historic buildings housing modern day inhabitants.

Back to why we came to Glen Innes: fossicking. The  Glen Rest Tourist Park, where we stayed, offers this peculiar activity on their property. We bought a bag of sapphire wash from the reception for $15. The owner Bill explained us how to find sapphires in this bag of dirt with two sieves, some water, pincers and a little plate. While we got started, he passionately told us about the fossicking history of Glen Innes and the surrounding lands. He left us to it and we quickly got bored of the sifting, cleaning, and searching. Until we found that first nice stone! Then it gets exciting and a little addictive, just like Bill warned. Don’t expect big stones, those have been sifted out by the company selling the bags of sapphire wash. We did find some small deep blue sapphires, but mainly quartz crystals and zircons (looks like pieces of glass). You can’t make any jewels out of it, but we kept those small stones as a keepsake. It’s mainly about the search and excitement of what you may find anyway. When you find yourself in Glen Innes, you might want to visit the Australian Standing Stones. These granite monoliths were set up in 1992, in recognition of the involvement of the Celtic races in the building of the Australian Nation. They’re quite impressive, but I wouldn’t call it a must see. Excalibur, the sword, is stuck in a stone there as well if you want to try your luck.

While road tripping through New South Wales (and the rest of Australia) we did a lot of geocaching, one of our favourite hike, road and city trip activities. We loved the series of geocaches in Guyra, especially those of Geono. They’re clever, cool, and original, so definitely worth a stop if you love geocaching. Some amazing Geocaches by Geono

2 thoughts on What to do in New South Wales