Known as La Ciutat de les Arts i les Ciències to locals, the City of Arts and Sciences is probably the most famous landmark of Valencia, Spain. Plans for this huge project started in 1989, to attract tourists from over the world. However, the first building was only officially opened in 1998.

What is the City of Arts and Sciences?

The City of Arts and Sciences, Ciudad de las Artes y las Ciencias in Spanish, is a complex consisting of 6 buildings and a bridge, spread over 2 km (~ 1.2 miles). Most of these were designed by Santiago Calatrava, but Oceanogràfic was the work of Félix Candela. As you might have expected, the price tag of this impressive piece of architecture far exceeded the intended budget. You get some amazing reflections in the water

The reflections really are beautiful

It’s not allowed to swim or even paddle in the waters of the City of Arts and Sciences. You can however rent a paddle board or small boat to go out on the water. Sometimes you can walk on water in giant zorb balls as well, for a small fee of course.

The Hemisfèric was the first building of the City of Arts and Sciences that opened in 1998. It’s the lowest building, only 26 m (~ 85 ft) at its highest point, housing a state-of-the-art iMax Cinema.

It resembles a human eye, the eye of wisdom, and was designed by Santiago Calatrava. The roof can slide open (like an eyelid), and the projection room is inside the iris. 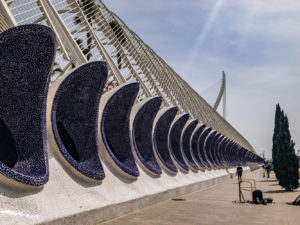 Car park with a garden on top

L'Umbracle, opened in 2000, is a covered car park with a garden on top that looks like a major arched walkway. Underneath the arches is the garden with plants native to Valencia. In summer, part of it is transformed to L’Umbracle Terraza, an event space.

Santiago Calatrava intended for climbing plants to cover the 55 fixed and 54 floating arches of L’Umbracle. But unfortunately the arches are too slippery and too far apart for that.

Next to the arches is a balcony looking out over the City of Arts and Sciences. Also called the Art Promenade, this balcony is used as an open-air art gallery of sculptures by contemporary artists. At the time of our visit there was a series of six sculptures called “My Secret Garden Valencia” by Arne Quinze, a Belgian conceptual artist.

At the southeastern end of L’Umbracle you can find the Astronomy Garden, with instruments to measure and understand things like the movements of the stars and sun. The museum as seen from the other side

Museu de les Ciències Príncipe Felipe, opened just 10 days later than L’Umbracle, is an interactive science museum. When squinting your eyes, and adding a tad of imagination, you can see it’s shaped as a whale skeleton.

Unlike most museums, this museum’s motto is “Forbidden not to touch, not to feel, not to think”. They want to educate their visitors in new technologies and science advancements in an entertaining way through interactive exhibitions and scientific activities.

To visit the Museu de les Ciènces you have to pay an entrance fee of €8 (~ $9) per person, but the ground floor, known as Calle Menor, is freely accessible. There you can find the ticket counter, a cafeteria, and a couple of small exhibitions, like the one on the history of bikes.

Oceanogràfic is the largest aquarium in Europe

Since its opening in 2003, Oceanogràfic is the largest aquarium in Europe, designed by Félix Candela. With 42 million liters (~ 11 million gallons) of water filled with hundreds of different species (including sharks and beluga whales), you’re surely in for a thrilling underwater experience.

Oceanogràfic consists of different buildings, representing different ecosystems. The sphere you can catch a glimpse of from the outside are the wetlands for example, while the igloo is the arctic region. The most prominent building, in the shape of a waterlily, houses the Underwater Restaurant.

Besides being the largest aquarium in Europe, Oceanogràfic has the longest underwater tunnel and largest dolphinarium in Europe as well. While we aren’t big on those dolphin shows and animals living in captivity either, Oceanogràfic does work hard when it comes to marine research, conservation and making people aware of the importance thereof.

Palau de les Arts Reina Sofía is the performing arts centre, with 4 auditoria for all kinds of opera, musical and theatre performances. It was designed by Santiago Calatrava and opened in 2005.

Equipped with all the latest technology, the Palau de les Arts is now an international player in the performing arts world. It resembles a Roman helmet; can you see the crest on top?

The last of the six buildings of the City of Arts and Sciences, the Àgora, opened in 2009. It’s a multi-purpose covered plaza fit for all kinds of events like congresses, conventions, concerts, performances, and exhibitions.

To us the building looks like a breaching whale. It’s meant to resemble 2 hands with intertwined fingers though, symbolising the meeting place the Ágora’s intended to be. The large interior space is like a covered public square, where people can come together. Between the Science Museum and the Ágora is the highest point in Valencia: the 125 m (~ 410 ft) high Pont l'Assut de l'Or. This impressive bridge was designed by Santiago Calatrava and completed in 2008.

To me it resembles a harp, but apparently locals think of a ham first. Pedestrians and cyclists can cross the bridge through the middle, so cars will always be photobombing.

City of Arts and Sciences Tickets

We already mentioned the individual ticket prices for each of the buildings at the City of Arts and Sciences above. You can buy these tickets upon arrival, or online beforehand on the official La Ciutat website. They also offer combination tickets, which save you a couple of euros when visiting more than one of the attractions.

A Valencia Tourist Card will get you a 15% discount on any of the ticket prices for tickets bought at the ticket counters in Oceanogràfic, Hemisfèric or the Science Museum. This card includes free entry or a discount to quite a number of museums, tours, and restaurants, and free use of public transport (bus, metro, and tram) in Valencia.

Interested in the Valencia Tourist Card?
Check out these options:

How to get to the City of Arts and Sciences

If you have a car at your disposal, you can probably find your way there using a navigation app like Google Maps. You can then park your car in L’Umbracle Parking, which is opened from Monday to Sunday from 8:00 till midnight. Note that you aren’t allowed to leave your car there overnight.

If you’re thinking of renting a car in Valencia, check out Auto Europe for a range of options. Valencia is a great city to explore by bike. It’s pretty flat and there are well-maintained bike lanes nearly everywhere. Depending on where you’re coming from, you can cycle through the Turia Gardens, the 9 km long park, to the City of Arts and Sciences.

Most accommodations rent out bikes, or you can simply walk into one of many bike rental shops throughout the city. Note that the Valencia Tourist Card gets you a discount at selected bike shops. Perfect for strolling around on a sunny day

If you don’t feel like navigating the Valencia streets by bike, their public transport network is very good as well. There are several bus stops near the City of Arts and Sciences, and you can use Google Maps or the EMT app to plan your route.

A one way bus ticket costs about €1.50 (~ $1.70). If you plan on taking the bus more frequently during your stay, you can buy a Bonobus Travel Card, or a Valencia Tourist Card.

On a Hop-on Hop-off Bus

Like many cities, Valencia has a Hop-on Hop-off Bus service as well. Usually red and open-top, these busses drive along the top tourist attractions and landmarks of a city. Like the City of Arts and Sciences for example, a stop on the Maritime Route of the Valencia Hop-on Hop-off Bus.

If you want to admire the fish at the biggest aquarium in Europe as well, you can buy a Valencia Hop-on Hop-off Bus and Oceanogràfic combination ticket. The City of Arts and Sciences does look pretty futuristic, right?

Hotels near the City of Arts and Sciences

Another option is staying near the City of Arts and Sciences. The city centre of Valencia is an easy 15 minute bike ride (through the Turia Gardens) away. Or you can take one of several busses going there.

We visited Valencia with a group of 6 friends, and shared an apartment at Valenciaflats, less than a 5 minute walk from the City of Arts and Sciences.

Check out the rates and availability at Valenciaflats or look through all accommodation options near the City of Arts and Sciences here:

Even if you’re not interested in visiting a museum or aquarium, the futuristic buildings of the City of Arts and Sciences are one of the must-see landmarks of Valencia. Don’t miss out! What more to do in Valencia?
Valencia is more than just the City of Arts and Sciences. Click here to check out our top 10 things to do in this port city of Spain! Visiting the City of Arts and Sciences in Valencia
Comments