When traveling by plane, you can save some money by passing up a direct flight and instead choose for a connecting flight. So when Brecht was looking for flights to spend New Year’s Eve in New York City, he booked one with a 6 hour layover in Berlin. That saved us about $250 per person, and gave us a chance to briefly explore Berlin.

In this post you’ll find what to do in Berlin, and how to get from the airport to the city centre.

How to get from Tegel Airport to Berlin city centre

Our connecting flights arrived and departed from Tegel Airport, situated in northwest Berlin. We had over 6 hours to kill in between, enough time for a short trip to the city.

Whereas you can always grab a taxi, we prefer public transport. It’s cheaper and greener. So to get from Tegel Airport to Berlin city centre, we took the TXL bus. It departs every 6 minutes right outside Terminal A and takes you in about 30 minutes to the famous Brandenburg Gate. You can buy a one way ticket when boarding the bus, costing €2.80 (~$3.30) per person.

There are alternative busses you can take as well (X9, 109, 128), depending on where you want to go. You can find more information on the VBB website.

How to get from Schönefeld Airport to Berlin city centre

There is however another airport in southeast Berlin: Schönefeld Airport. We haven’t been there yet, but from what we can gather online you can either take the train or bus to get from Schönefeld Airport to Berlin city centre.

The Airport Express train (RE7 or RB14) runs twice an hour, taking you in 30 minutes to Berlin’s main station called Berlin Hauptbahnhof. All trains and busses leave from the Schönefeld Railway Station, which is a 5 minute walk from the airport via a covered walkway. Some busses pass by Terminal A as well.

What to do in Berlin in 6 hours

When you’re having a short layover in Berlin, like we did, you may want to get out of the airport for a while. The city centre is just 30 minutes away, and there’s plenty to do in Berlin to fill a couple of hours.

Here’s what we did during our 6 hour layover in Berlin, from which we spent about 3 hours in the city.

Visit some of Berlin’s most famous landmarks

The most popular tourist spot in all of Berlin is without a doubt the  Brandenburg Gate, known as the Brandenburger Tor in German. No matter the time or weather, you’ll always find hordes of tourists taking selfies with this famous landmark. It’s situated on a large square, Pariser Platz, with lots of souvenir shops, a Starbucks (with a view on the Gate), and a Madame Tussauds. There’s a museum about the Brandenburg Gate as well, but unfortunately we didn’t have enough time for a visit.

The area west of the Brandenburger Tor is known as Tiergarten, one of the largest urban parks in all of Germany. The Central Park of Berlin if you will. It’s supposed to be full of life in spring and summer, but not so much in winter. We only passed the occasional walker, while wandering around a small part of the park.

Near Brandenburger Tor, adjoining Tiergarten as well, is the Reichstag. Opened in 1894, this impressive building now houses the German Parliament. Notice the words “Dem Deutschen Volke”, meaning “The German People” inscribed on the facade. You can visit the glass dome on the rooftop terrace for a nice view over the surrounding area. Note that you need to register beforehand for that, which may not be ideal when you’re only visiting during a 6 hour layover in Berlin. 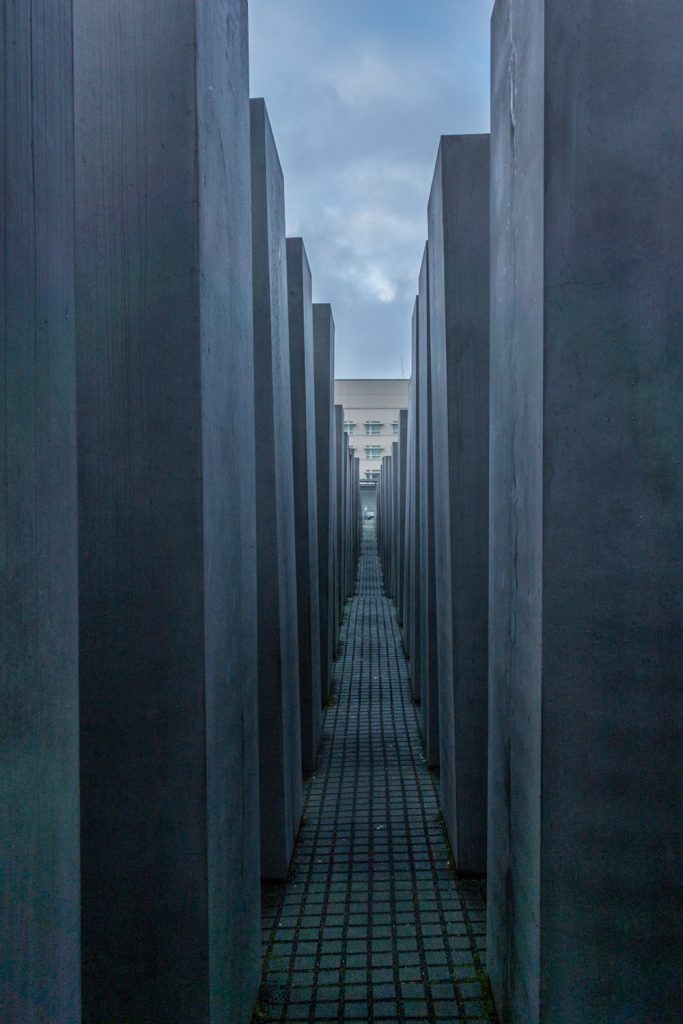 Remants of the Berlin Wall

About a 5 minute walk from the Brandenburger Tor you’ll find the Memorial to the Murdered Jews of Europe. Better known as the Holocaust Memorial, this Field of Stelae contains 2,711 concrete slabs ranging in height from 0.2 to 4.7 m (~0.66 to 15.42 feet). The information centre, with, among others, a Room of Names and a Room of Sites, is situated underneath the memorial.

And last, but not least, we “crossed” the Berlin Wall, another well-known historic landmark. It fell in 1989, but the entire length of where it used to stand, is marked on the ground. Remnants of the wall can be found throughout Berlin, but we only visited the parts that are on display on the Potsdamer Platz.

Other fun things to do in Berlin

If there’s one thing we (try to) do in every city we visit, it’s geocaching. While checking out which ones of the over 4,000 geocaches in Berlin were worth looking for, Brecht noticed one particularly popular geocache. It has over 8,800 favourite points, which is by far the highest score we’ve ever encountered. Being stealthy wasn’t easy with all those selfie-takers at the hiding spot, but we managed to find the cache. Worth a search if you’re in the neighbourhood! Birthe looking for the Geocache If it happens to be raining during your layover in Berlin, or you’re just not in the mood for wandering along its famous landmarks, you can always go shopping at the Mall of Berlin. It’s really huge, and has a big slide spanning 2 floors.

I hope this convinced you to get out of that airport during your layover in Berlin. Everything we mentioned is perfectly doable in a couple of hours, and all worth it. Especially the geocache! Have you ever had an overlay in Berlin as well or just visited the city? We’d love to read about what we missed out on in the comments, as we’ll definitely will be heading back some day! Things to do during a 6 hour layover in Berlin
Comments