Barcelona Airport, otherwise known as El Prat Airport, is the 7th busiest airport in Europe. Not surprisingly, as Barcelona is a very popular city trip destination. But how do you get from El Prat to the city centre of Barcelona and back? Keep reading to find out.

BCN is the airport code of Barcelona Airport. With over 50 million passengers passing through in 2018, it’s the second busiest airport in Spain. After Madrid Airport, in the capital of Spain, which processed almost 58 million passengers in 2018.

How many airports in Barcelona?

Barcelona-El Prat Airport has 2 terminals though, 4 km (~ 2.5 miles) apart from each other. Terminal 1 was opened in 2009, taking over most of the flights and leaving Terminal 2 for the low cost and regional carriers.

How far is Barcelona Airport from the city centre?

Barcelona Airport is located 13 km (~ 8 miles) southwest of the city centre of Barcelona, in the town of El Prat de Llobregat. Hence the official name of the airport: Barcelona-El Prat.

By car (or taxi) it takes about 25 minutes to get from Barcelona city to the airport. Depending on where you’re staying, the Aerobus might be a better (read: cheaper) option than taking a taxi though.

When you’re considering using public transport to get from the city to Barcelona Airport, the best option might differ depending on which terminal you need to be in.

A shuttle bus operates between Terminal 1 and Terminal 2, every 5 to 10 minutes. But since they are 4 km (~ 2.5 miles) apart, the bus ride easily takes 10 to 15 minutes. This Barcelona Airport shuttle service is free of charge, but it’s definitely faster to head to the correct terminal right away.

TIP: With the Hola Barcelona Travel Card you can take the public transport for an unlimited number of times in a span of 48, 72, 96, or 120 hours, including the airport lines.
Another option is the Barcelona Express Card, which gets you 2 days of unlimited journeys on public transport, and a discount at a wide range of museums, restaurants, shops and more.
A 3rd option is the Barcelona Card, which includes free admission to a selection of museums and other attractions, discounts on additional attractions and free travel on public transport for 3, 4, or 5 days.

There are 2 different busses you can take to the Barcelona-El Prat Airport by day, and 1 by night.

When it comes to public transport, the best option to get from Barcelona Airport to the city and back is the official airport shuttle bus called Aerobus. It has 2 lines: A1 which heads to Terminal 1, and A2 which heads to Terminal 2. They follow the same route, but end at a different stop so make sure to check your terminal in advance.

The Aerobus is operational between 5:35 and 00:30, 365 days a year, leaving every 5 to 10 minutes. It takes about 35 minutes to get from Plaça Catalunya to Barcelona-El Prat Airport. On the bus there’s plenty of room for your luggage. Aerobus is a great option for getting to Barcelona Airport Plenty of space for luggage in the Aerobus For our return trip we took the Aerobus

For up-to-date timetables, bus routes and ticket prices, we refer to the Aerobus website.

You can buy your Aerobus ticket right before boarding from the staff at the stops or the bus driver. They only accept cash and their change is limited to €20. Buying your ticket online beforehand is also possible, through the Aerobus website, or via GetYourGuide.

Note that the Aerobus shuttle service is not included when you buy one of the Barcelona Tourist Cards mentioned above.

Another option to get from and to Barcelona Airport (T1 and T2) is taking the regular bus line 46. It leaves about every 15 minutes from Plaça Espanya, taking about 30 minutes to get to the airport. This bus line is operational between 5:00 and midnight.

A single bus ticket costs €2.40 (~ $2.70) and can be bought from the driver on the bus. This bus line is also included in the Barcelona Tourist Cards mentioned above.

So this option is cheaper than the Aerobus. However, keep in mind that when you’re carrying a lot of luggage, you’ll probably prefer the Aerobus over a possibly packed regular bus.

For a detailed bus route we refer to the TMB website. Click on a stop to see more info on the bus schedule.

If you need to get to Barcelona-El Prat Airport at night, Nitbus has your back. There are 3 nighttime lines running to the airport: N16, N17 and N18. They’re all operational every night between 23:00 and 5:00, leaving every 20 minutes.

These 3 lines all start at the same bus stop and drive more or less the same route. The difference is that the N16 and N17 have a bunch of extra stops in the town El Prat de Llobregat, so it’s about 20 minutes slower than the N18.

The N18 drives about 30 minutes from Ronda Universitat to the airport and stops at both Terminal 1 and Terminal 2.

The N16 on the other hand stops only at Terminal 2, while the N17 only stops at Terminal 1. Both take about 50 minutes between Ronda Universitat and the airport.

For more information on the bus route with all the stops we refer to the AMB website.

You can buy a single bus ticket for €2.40 (~ $2.70) from the bus driver. Note that the Barcelona Tourist Cards mentioned above aren’t valid on these nighttime busses.

Keep in mind that these are regular city busses, so not ideal when you have more than just hand luggage.

Heading to Barcelona Airport by train is another option. The R2N (North) line connects Terminal 2 to Barcelona and a couple of other towns in the neighbourhood.

From Passeig de Gràcia, 1 of 3 train stations in Barcelona the R2N line stops, it takes about 30 minutes to get to Barcelona-El Prat Airport. The train passes every 30 minutes.

A single train ticket costs €4.60 (~ $5.10) per person, as you’re travelling through 4 zones. You can buy it at the vending machines in the stations or at the staffed counters. Note that the Barcelona Tourist Cards mentioned above aren’t valid on the R2N line.

Make sure you take the R2N (north), because this is the only one from the R2 lines that stops at the airport!

There’s one metro line from Barcelona Airport to the city, L9 Sud (South). It runs from Terminal 1 to Zona Universitaria, its end station, in about 30 minutes, every 7 minutes. Brecht getting tickets for the Metro

This L9 Sud line has a couple of stops where you can transfer to another metro line to get to the city centre of Barcelona, but we already mentioned other options faster than this. It’s probably only recommend if Zona Universitària is where you need to be.

The Barcelona Airport metro station is below Terminal 1, and outside Terminal 2. An Airport metro ticket, valid for a single journey between the airport and the rest of the metro network, costs €5.15 (~ $5.75) per person and can be bought at the vending machines in the station.

The most convenient way to get anywhere is often taking a taxi, but it’s hardly ever the cheapest. Expect to pay somewhere around €30 to €35 (~ $33 to $39) for a 25 minute taxi transfer from Barcelona Airport to the city centre.

All terminals at Barcelona-El Prat Airport have taxi stops outside the arrivals area. Join the queue and wait for your turn. Keep the address of your destination handy for a smooth departure.

If you prefer to have someone waiting for you, holding a sign with your name, instead of joining the taxi queue, you might want to try Welcome Pickups. They allow you to book and pay your taxi online beforehand. No queueing! 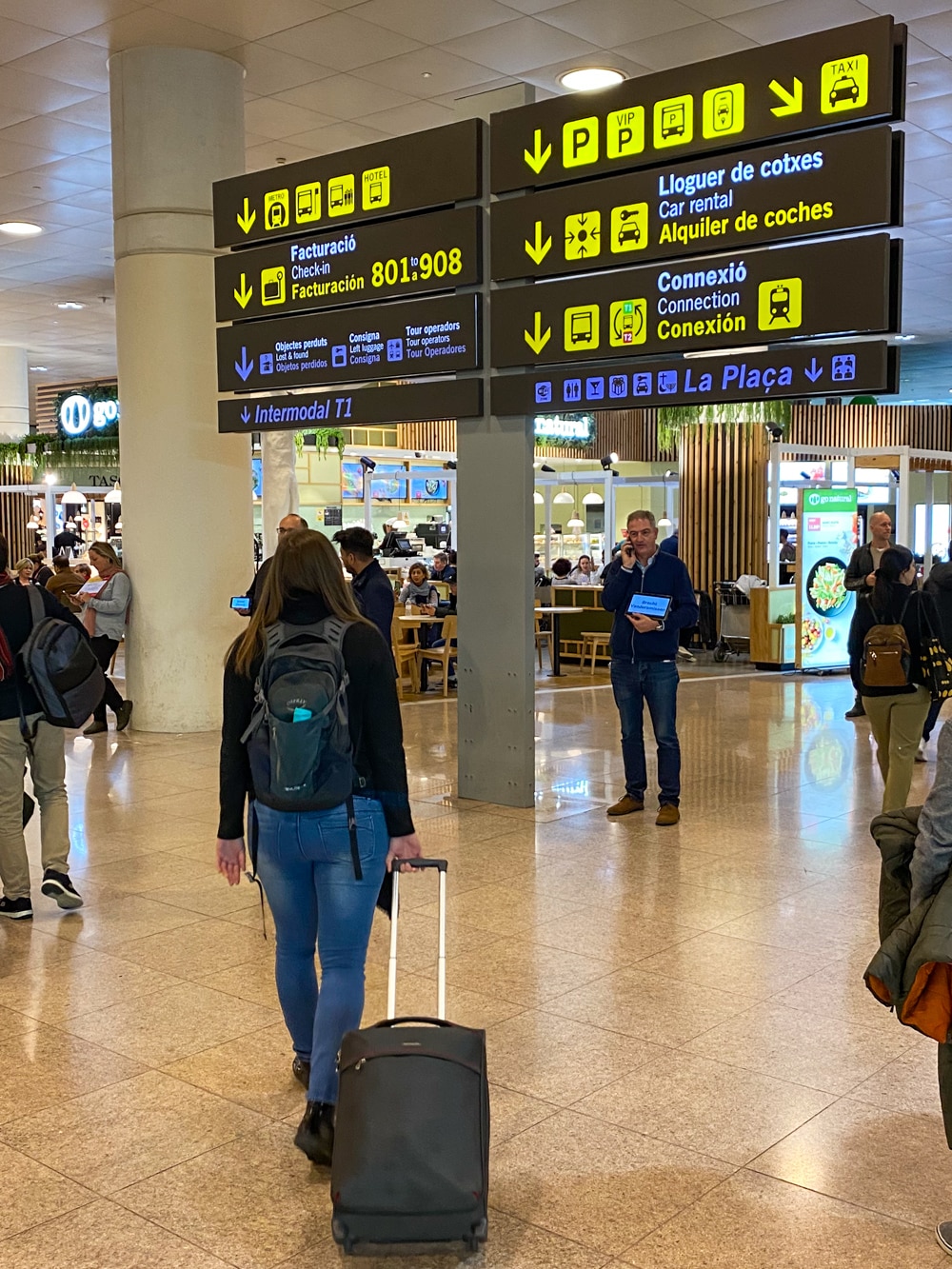 Our Welcome Pickups driver waiting for us at the airport Comfortable drive to the city center with Welcome Pickups

We had a Welcome Pickups driver waiting for us in the arrivals hall when arriving in Barcelona by plane. His car (a regular Barcelona black and yellow taxi) was just outside the building, with a bottle of water for each of us in it. The guy was very friendly, explaining some of the sights we passed, talking about the upcoming El Clásico we had tickets for.

The regular price for an aiport pickup by Welcome Pickups on a Sunday afternoon is €43 (~ $48). The meter read about €40 (~ $44) when he dropped us off at our hotel. So yes, it’s slightly more expensive, but you don’t have to wait in line for an airport taxi. That’s worth something too, if it’s busy.

It’s also convenient to book your return trip through Welcome Pickups. That way you don’t have to worry about getting to the airport in time for your flight back.

Anyhow, we can definitely recommend the airport taxi service by Welcome Pickups! Check out their airport transfer rate for your upcoming Barcelona trip here.

Disclosure: we received a 50% discount for our first Welcome Pickups booking. Note that we still gave our honest opinion about our experience.

A rental car isn’t necessary when you’re just visiting Barcelona. If you’re planning on starting your road trip from Barcelona-El Prat Airport on the other hand, you’ll need a car. Check out Auto Europe for a range of options. Good to know: in Spain, they drive on the right.

If you’re in Barcelona for a city trip, it probably won’t make sense to spend the night in a hotel near Barcelona-El Prat Airport. However, if this is the start and/or end of a (Spanish) road trip, a hotel near the airport might be convenient. Check out all accommodation options near Barcelona Airport on the map below:

Now, what’s the best way to get from Barcelona Airport to the city centre?

When comparing the different options to travel from Barcelona Airport Terminal 1 to the city, more precisely Plaça Catalunya, by day, taking the Aerobus is the best option when it comes to ease, time, and price.

If you have more time than money and hand luggage only, you might want to consider a combination of the metro and bus 46. This is also the only option for which you can use your Barcelona Tourist Card. The hassle isn’t worth the slight price difference though, if you ask us.

If you’re willing to spend a little more for some comfort while getting to Barcelona Airport, or your hotel isn’t located near the public transport network, you can take a taxi.

And if you hate queueing for a taxi when you’ve just arrived in your destination (and aren’t on a budget), book a taxi beforehand with Welcome Pickups.

Ultimately, the best way to get from Barcelona Airport to the city centre depends on where you’re staying, your budget, and which terminal you need to be in. Hope the above information gave you some clarity on which option is best for you!

If you have any additional questions, please let us know in the comments. How to get from the Airport to Barcelona
Comments